Charlie James : This covers the face and is soft. I like the adjustable strap, might like it better if it were Velcro. I would buy it again.

Smriti Tamang : Great fit and so soft. Will be buying more. 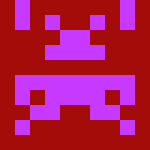